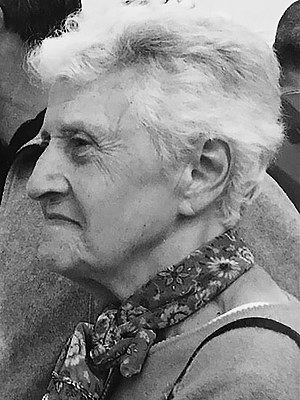 After a long and full life, it is with sadness that the family of Arlene (Julia Arlene) Silver, 95 of Lunenburg announces her passing on Tuesday, June 15, 2021 at Harbour View Haven Home for Special Care, Lunenburg. Born in Blue Rocks, Arlene was the daughter of the late Fenton William and Ellen Louise (Knickle) Tanner.

In her earlier years, Julia worked at B. G. Oxner General Store in Lunenburg. After the War, she met her lifelong love, Gilbert. They soon married and shortly after moved to Toronto where she raised her six children. In 1990, she and Gilbert moved back to Lunenburg to enjoy their retirement years. Arlene’s greatest joy was raising her children and then enjoying time well spent with her grandchildren. Arlene’s grandchildren were the light of her life. She loved each one “a bushel and a peck” as she would often say.

Arlene had a desire to see the world and in her retirement years enjoyed many travels with her daughters, and good friend and cousin Gertie. There were many trips with Gilbert as well to visit her children and grandchildren.

When Arlene sat to rest at the end of her day, a cup of tea and a British comedy was sure to be part of her ritual. What a contagious belly laugh was heard in these moments. And of course, a scoop of grape nut ice cream was enjoyed whenever it could be had.

Arlene was predeceased by her husband, Gilbert (Gibby) sister, Statia “Pat” McDonald and a brother, Gordon Tanner and her baby son Michael William.

The family wants to give a heartfelt thank you to the ever-caring team at Harbour View Haven. They made her days brighter and her family’s lighter. They were an ongoing, steadfast support to her daughter Michelle.

Funeral arrangements are under the direction of the Dana L. Sweeny Funeral Home, Lunenburg. A graveside interment service to celebrate Arlene’s life will be held at a later date at Hillcrest Cemetery, Lunenburg. In lieu of flowers memorial donations may be made to the Alzheimer’s Society of Nova Scotia or to any other charity.