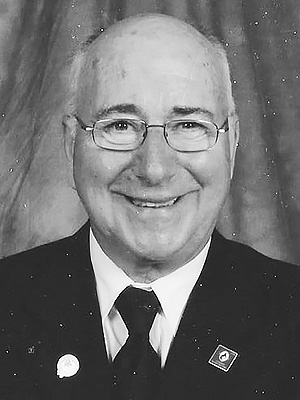 It is with great sadness that the family of Elroy Alexander Creaser, 82 of First South announces his sudden passing on Thursday, April 15, 2021 at home. Born in Feltzen South on July 30, 1938, he was the son of the late Milton and Emily (Knickle) Creaser.

Elroy began working at 16 going to sea on the Nellie A. Cluett. He spent time working on various boats that sailed out of Lunenburg before staying ashore to work at National Sea Products for eight years. He then went to work on the Sable Island Ferry, sailing out of Dartmouth to Sable Island. In the early 70s, Elroy moved to Fisheries and Oceans Canada to work on the research vessels E. E. Prince for 14 years and then the Alfred Needler for 7 years before retiring at 58.

Elroy was a proud blood donor. He truly believed it was “in him to give” and being the universal donor blood type made his gift even more valuable. Elroy was recognized by Canadian Blood Services for giving over 125 donations of blood.

In his retirement, Elroy joined Unity Masonic Lodge No. 4. He served in various offices in the Lodge including the office of Stewart in Grand Lodge for a one-year term. He enjoyed the camaraderie of Lodge, including the special events and social get-togethers.

Elroy was a faithful member of St. John’s Anglican Church for 60 years. He served the church in many capacities, including time on Parish Council and as Warden of the church. When the church burned down in 2001, he joined with his fellow parishioners to sift through the rubble to salvage what remained.

Elroy was a kind and gentle man who valued his family, church, and his community. He was an avid walker, who enjoyed walking to Tim’s for his morning coffee and having a yarn with whoever was there. He also loved to drive. Elroy volunteered driving dialysis patients to Halifax 3 times per week. He would pass the time walking around the city while he waited for the patients to have their treatment. Elroy will be greatly missed by all those who knew and loved him.

He was predeceased by his parents, Milton and Emily, sister, Beryl, son, Blair, and great-granddaughter Aurora.

Funeral arrangements are under the direction of the Dana L. Sweeny Funeral Home, 11213, Highway 3, Lunenburg. Due to COVID-19, a memorial service will be held at a later date.

In lieu of flowers, memorial donations may be made to Canadian Blood Services, St. John’s Anglican Church or to a charity of your choice.