Welcome to the South Shore

As they walked out into the frigid air at Halifax's Robert Stanfield International Airport on Monday night, it might have seemed like one final assault on the senses for Syrian refugees Mohamed Al Kafri, his wife Fadia Mekdad and their three children. Fatima, 7, Farah, 6 and Amir, 2.

However, after two years of dreaming of the moment when they might start a new life in Canada, and having travelled over 9,000 kilometres from northern Lebanon to become the first Syrian refugees in Lunenburg County, they were given winter jackets upon arrival in Toronto and wrapped up in a cloak of appreciation to complete their trip to Nova Scotia.

The family was sponsored by St. Joseph's Catholic Church in Bridgewater, which had raised $23,000 to bring the family in. In addition to the cash, there were numerous contributions in kind. Tim O'Regan of O'Regan's Toyota, for example, provided a minivan to pick the family up from the airport, and Bridgewater's Bulk Barn has invited them to come to the store to stock their kitchen with spices and other foods.

A number of the church's refugee sponsorship committee members travelled from Bridgewater to the airport to greet the family with gifts. On hand were the committee chair, John MacDonald, Father Jim MacDonald, Deacon Patrick Morris, Robert and Sharon Boudreau, and Ernie and Wenda O'Neill. Mohamed Elkateb of Maitland acted as interpretor.

Asked by LighthouseNOW what Al Kafri was feeling, Elkateb translated: 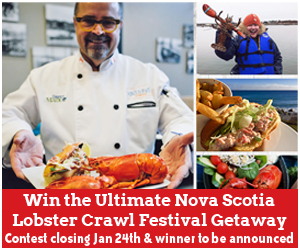 "The first word that came out of his mouth in Arabic, he 'appreciates' Canada. He appreciates being on Canadian soil. Him and his family."

Of Mekdad, Elkateb relayed, "She wishes to have a happy life with her family in Canada." He added that she said she appreciates the committee members who got it all started, and singled out John MacDonald in particular.

After a bit of a shuffle trying to get the child seat and boosters secured in the minivan, the family was headed to Bridgewater. For the first week or so, they will be staying at the home of parishioners in town. At the end of the month, after they choose from among furniture that was donated, they'll be moving into an apartment in town.

Although the paperwork the refugee committee received indicated Al Kabri was a "general labourer," he said while he was in his homeland, he was a fundraiser for a charitable group that assisted mentally and physically-challenged people. He says he and his family left Syria for Lebanon three years ago,. None of them speak English. Picking up the language will be a priority for the newcomers.

MacDonald points to Elkateb, who arrived in Canada as a sponsored immigrant in 1956 and went on to send his children to Canadian universities, and they in turn went on to prosper in successful careers. Speaking of refugees, John MacDonald said, "The number one prerequisite to make some inroads is to get the language."