The lights are low and the chirpy Christmas music is turned off. It's after hours at the Bridgewater Mall, and a handful of kids gingerly approach Santa Claus, who has left his perch and is reading a book on the floor.

It's not the typical scene of frantic shoppers waiting in long lines for photos with Saint Nick. Instead, Silent Santa, which was held on Sunday for the third year, is providing a comfortable space for kids on the autism spectrum to meet Santa on their own terms.

It's a rare opportunity for Lydia Spidell and her six-year-old daughter Marissa. The family has taken to skipping Santa visits in recent years because the mall can be distracting and overwhelming.

"She had anxiety and pains in her stomach before she even got here and was starting to get a temperature, just the thought of coming in," said Spidell.

But when Marissa walked into the mall on Sunday evening it was "totally different."

"It's like really relaxed. You can see she's got the bunny there. She was walking the dog ... It's surprising, really because usually it's so hectic for her," said Spidell, who attended the event for the first time this year.

Silent Santa is organized by Hinchinbrook Farm Society, an equine-therapy program that's catered to kids and adults with special needs.

Program director Patricia McGill says the event is as much for the parents as it is for the kids.

"A lot of parents with special needs kids don't get the milestones that everybody else gets. That sucks," she said.

McGill, who has taught therapeutic horseback riding from her Blockhouse property for nine years, brought along Snoopie, a grey bunny, and a Newfoundland dog named Kelly. 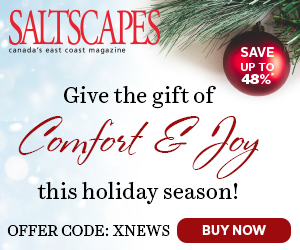 Kids wandered around with the bunny tucked under their arms. Marissa immediately found a friend in Kelly, who she lead around on a leash before venturing to meet Santa.

Everything about the experience is catered to the kids, said McGill.

The festive display with its wooden arches and fake snow piled high can be an overwhelming place for some people.

"We think it's very inviting, but for a kid on the spectrum it can be very frightening to go through those gates," said McGill. "Santa will come out here. That's why we put the couch here. He'll play on the floor."

With Silent Santa events becoming more popular in malls across North America, McGill says Santas are no longer "just jolly fat men." Many are learning about autism and other kinds of special needs.

This year, 12 kids signed up for staggered appointments between 6 p.m. and 8 p.m. Sometimes it can take 30 or 40 minutes for a child to get comfortable enough to approach Santa.

"The first year they might not have went as far. The third year they're going right up to see Santa. So you can see the improvement in the kids too and I think that's good," said mall manager Lisa Flemming, who helps organize the event with McGill.

Earlier this month, Hinchinbrook Farm also organized a quiet time for families to shop at the Whimsical Children's Store before it opened.

Spidell said this year's shopping and visit with Santa didn't involve the usual anxiety for her daughter.

"It just slows everything down so she can handle it piece by piece," she said, adding that the family may have found a new Christmas tradition.

"It will definitely be a yearly thing that we do now with her," she said. "It's peaceful. Anyone could come in here and enjoy this."