The Nature Conservancy of Canada's Atlantic region has closed its coastal hiking trail at Gaff Point in Lunenburg County until further notice because of damage caused by Hurricane Dorian.

"We have trees over the trail, and some sections of the trail have washed into the ocean, as you can see from the attached photo, so it's not safe now for hikers," Kathryn Morse, director of communications for the region, told LighthouseNOW in an e-mail. "We'd like to let people know to stay away," she added.

Gaff Point is a seven-kilometre looped trail, which begins at Hirtles Beach. The 124-acre property was designated as a protected coastline and wilderness area with the Nature Conservancy of Canada in 2002. 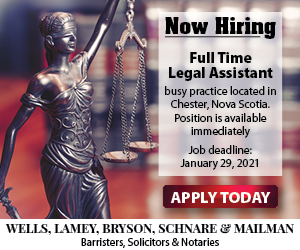 He said members from the conservancy were expected to go out early this week to do an assessment and make a clean-up plan along with its partner groups, the Nova Scotia Nature Trust, and the Kingsburg Coastal Conservancy. The Kingsburg group regularly monitors the trail and its members reported the damage.

According to Van Hemessen, reparations will require removing the fallen trees and those that haven't yet completely fallen and may be a hazard, as well as hanging branches.

"But there's also a big section of the trail that was basically blown away," he added, explaining that the trail will have to be rerouted there.

"I'm not sure what we'll be up against. We'll probably have to do some tree removal for the sake of creating trails," he told LighthouseNOW.

It may take some time, "at least in having the trail open to hikers our goal is to make sure that we can do that so that it's safe," said Van Hemessen. And while he didn't know the exact timeline, he added,"it's a priority for sure."